So, I have been on a mission.
A mission to find a suitable 'copy cat' recipe for Mary's Gone Crackers. 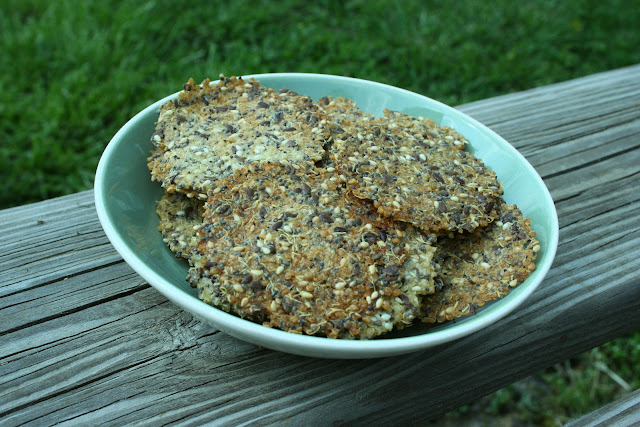 A month or so ago, while discussing icky gluten and my desire to steer away from it with my neighbors...they turned me on to this swanky little snack. I was SOLD immediately...gluten free or not, "healthy" or not, they were just plain good.

Ahhhhhhh but the kicker.  At our local health food store, as much as I LOVE the place... they are more pricey than I want to pay.  Of course, if I want to foot the bill I can order in bulk and the price per box plummets, but where's the adventure in that!?

I want to MAKE THEM MYSELF...and so began the mission.

I tried...
too soft
too brittle
too rancid flax seeds <oops, and I even fed that batch to said neighbors, eep!!>
too much Bragg's
not enough salt
not enough Bragg's
etc. etc. ad nauseam

I finally did it though.
After reading several other knock off recipes, which I am sure worked for the folks that made them, I really had to settle in the end, for tweaking everything into one fantastic copy cat recipe.


First, I prepared the rice and quinoa using traditional methods. 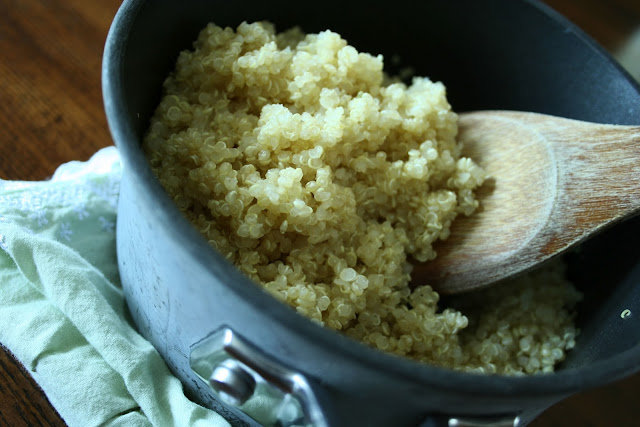 While they cooked I measured out the rest of the ingredients.
I also preheated the oven to 350 degrees. 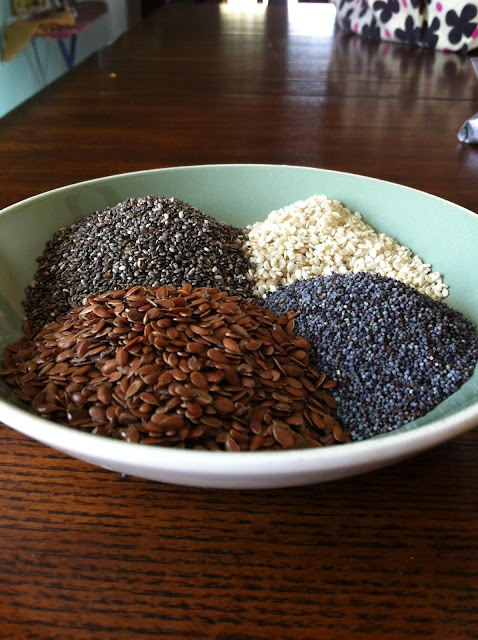 Next I added the cooked brown rice to my blender (it would work so SO much easier in a food processor, but, well...that's a story for another day)...I pulsed it into a paste, adding *just* enough water to make it easily blended down. 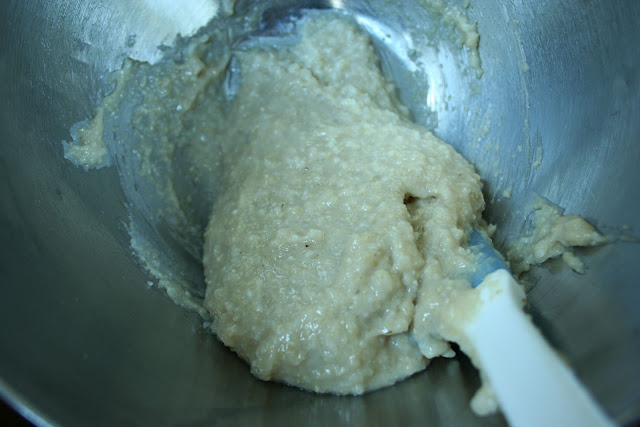 Put the paste into a bowl, and add the quinoa, mixing it well. 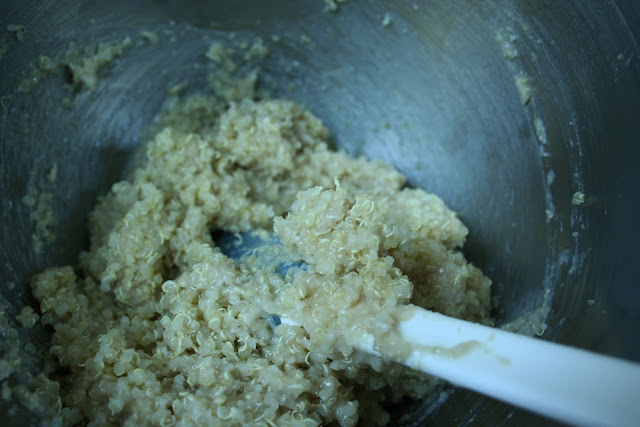 Toss in all your yummy seeds and seasonings! 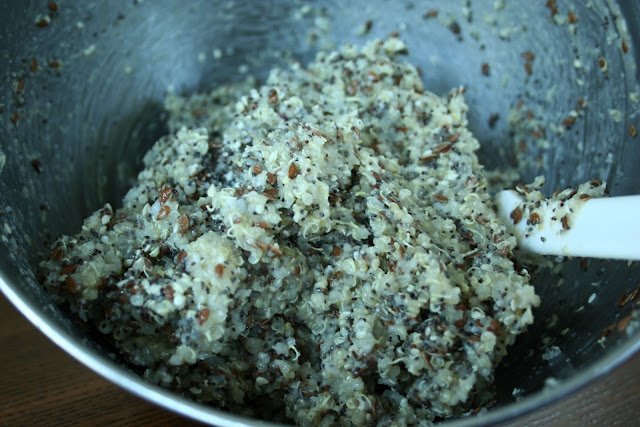 Cut a small square of parchment paper (very important, foil, plastic wrap, etc. will not have the same effect)...I used a piece about 5x5 inches or so. Set it aside and grab a can of spray oil (olive!). Now you are ready to begin the tedious process of cracker smooshing!

Spray your pan. (must be directly baked on the pan...when done on parchment they do not brown properly)

Wet your hands well and shape the dough into balls 1/2 inch in diameter. 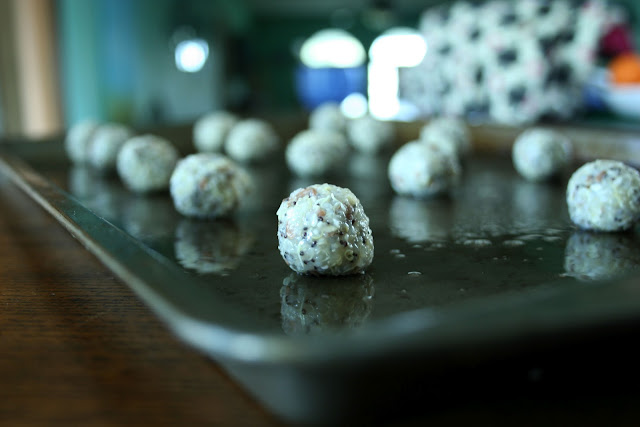 The interesting part now.  You take the piece of parchment you cut, and LIGHTLY spray it with oil. (On a few batches, I 'overdid it' on the oil and you could taste it to the point of distraction).  Take a flat bottom cup, or in my case the lid to the spray oil, and with the oiled side down, cover the ball with the paper, then SMOOOOOOSH it with the lid.  Continue until they start sticking and you can respray the paper. 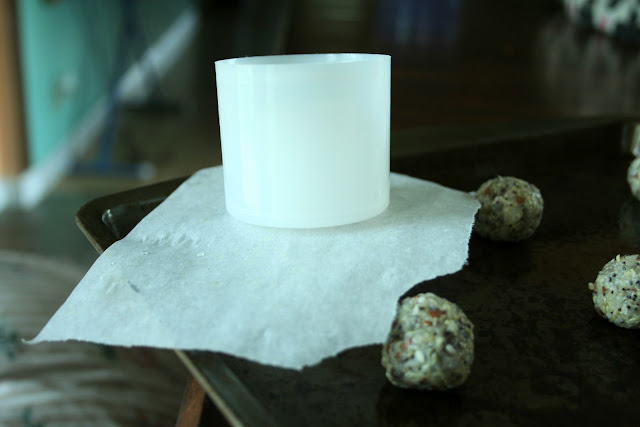 The crackers need to be thin to the point of transparency...if they are thick they don't crisp properly or brown as well.  They also don't have that CRUNCH  they need. Some of mine actually had gaps where it was spread so thin, and those turned out great! 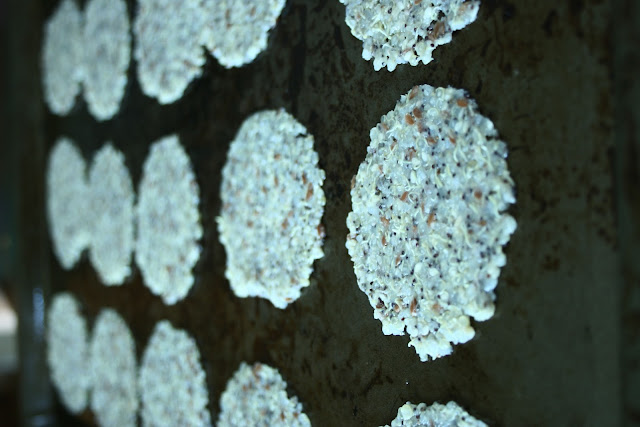 And we bake!  The first several batches I baked on a lower setting for a longer time. It seemed to make more sense that way, as well as a few of the other recipes I had looked over suggested this as well.  One time I totally forgot and just went with your 'one-size-fits-all' 350 degree setting, and whaddaya' know...they cooked faster and were FINE. So...yeah.

I'll be honest, I cooked them in wildly varying time frames, sometimes 10 mins, sometimes as much as 20, you really want to just keep an eye on them and when they get that nice, dark golden brown color...yank them out of there!  I rotated the pan a few times just to ensure they browned/crisped evenly...my oven is fickle like that. 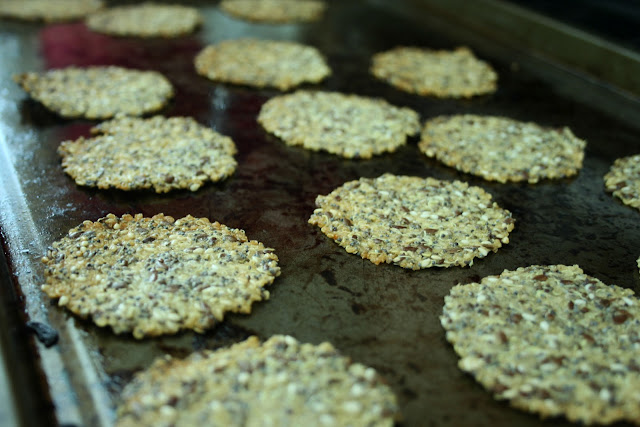 Take them out, let them chill on the pan for a while....and there you have it!

I'm planning now to start trying variations on the recipe....Cracked Black Pepper...Rosemary and Parmesean....so many possibilities!

If you get brave and give this recipe a whirl, let me know how it turns out!

In 'what's going on at home' news...I did plant a few things in the garden today, I may try to sit down and post about that tonight or tomorrow.

Email ThisBlogThis!Share to TwitterShare to FacebookShare to Pinterest
Labels: Around the house, cooking, food
Home
Subscribe to: Posts (Atom)